Next weekend is Fosdem, the largest open source event in Europe. A lot of people will no doubt be coming for the first time, or thinking about coming another year, so I thought it might be helpful to explain what it is. Fosdem is not really like any other event, so Americans in particular find it confusing, thinking it might be like OSCON or something. It is not. Of US events I know, it is perhaps most like All Things Open, but it really is a different thing. My qualifications for writing this are that I have been on and off since about 2004. I worked there a few years, back when Greenpeace ran the conference WiFi, before Cisco took over, and I have spoken once.

The first practicality is you notice you don’t have to register, or indeed pay. You should however donate (on site) if you can afford it, although they will try to give you a really ugly t-shirt if you do. Most people do not donate, so the conference relies on volunteers, the Université libre de Bruxelles which gives the space, and, increasingly, corporate sponsors. The next practicality is where to stay. The location is not very central, and while there is a tram link it can get extraordinarily full. The best plan is to either stay within walking distance, or to stay near the start of the tram line, which is near St Catherine in the centre of Brussels. You can also use taxi/Uber but the sheer number of people trying to get to and from the location can mean delays. Brussels is one of my favourite cities in Europe, and along with my friends who live there, one of the reasons I usually decide to attend. I highly recommend you spend some time visiting the city. It is February though, so bring hat, gloves and warm clothes. Some years it has been snowy and the hills get slippery so be careful walking around, and allow extra time.

The next practicality is that this conference is overwhelmingly attended by white men. Most tracks will not have any women speakers. We know tech has a diversity problem, but it is really in your face here more than other places. Since 2016 there has at least been a code of conduct after Sarah Mei wrote about it in 2015. Richard Stallman attended as recently as 2016. Sarah’s piece says it “feels like 2007”, and this is changing very slowly. 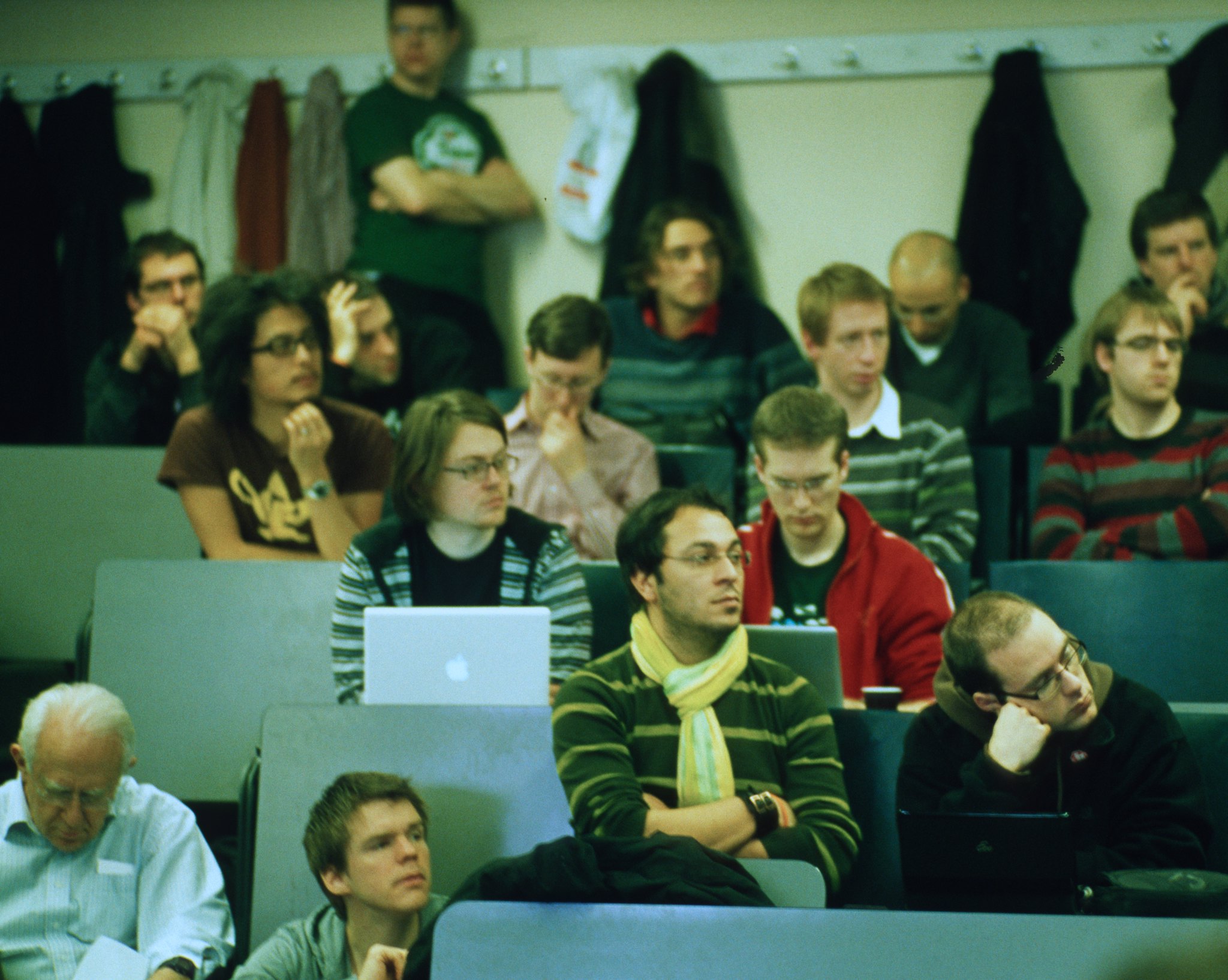 Fosdem started as a developer meetup place, where distributed communities would meet to hack on things, and talk about what they have done. So everything is divided by project like grouping. There are a large number of rooms for talks, but not enough for all the diversity of modern open source, so some years projects like Perl that always used to have Fosdem community meetings don’t get a room, and things get grouped where they used to be split, like “small languages” or “desktop”. From an audience point of view thats better, and the community meetings do tend to happen, in the hacking rooms, over meals and so on. The traditional thing to do is sit in one room all day, but of course lots of people are interested in learning about new things and want to wander around. And some things are massively popular and in smallish rooms (most rooms are smallish), such as the Go room in recent years.

So did fosdem decide to give away deodorant yet, or is it still the same ol thing

So the talk you want to go to might well be full. Full means full, if the sign is on the door it means you won’t get in. Remember all the talks are recorded and streamed, with AV team is pretty amazing. Years ago only some of the rooms were recorded, but now you won’t miss them. So have a backup plan. I remember a particularly enjoyable we can’t get into the Go devroom meeting with Jaana and others one year. Overall my strategy is generally to go to a few things at random that might be interesting, maybe target a few specific ones that I really want to go to (and go early maybe for the previoustalk) but not regret if I can’t get in, and spend most of the time talking to people. The random things can be great, that is how I started working on NetBSD and rump kernels, after going to a talk pretty much because I thought a talk about testing kernels might be interesting. You never know what paths you might go down in future.

Note there is a growing Fringe of events around Fosdem, both before, after and during. No dount, like with the Edinburgh Festical, the Fringe will soon dwarf the original event.

The whole event is really hectic, and there are going tobe maybe 6,000 people there, maybe it is more. This gets overwhelming, so take time out for yourself. I am only planning to attend on Saturday this year, and just to chill out in Brussels on Sunday.

Fosdem has a strong culture of open source as freedom and as a political statement, and there is widespread antipathy to corporate open source. For a long time there was no real sign of the larger tech companies, but this has changed in recent years, with Google and AWS sponsoring this year as is the CNCF, and visible presence of more corporate and industry rather than grassroots open source. You will meet people who don’t like this, don’t like permissive licenses, and might object to your company’s open source policies. In many ways this feels kind of refreshing

Food is very important. Talks run all day, so you need to plan some time for lunch. The quickest thing is the baguettes that are available at various places, eg downstairs back of Jansson. They are very efficient about dispensing these fast. There isn’t much choice. There are food trucks out front, with huge queues at lunchtime. I usually go down the road to Le Pain Quotidian (eat in or take away) in the small cluster of shops down the road. That is busy but less so. There is really not much else around this area.

Coffee is important too. There is a GitHub sponsored coffee stall that is good, but it is free so the queue tends to be very long. The next best coffee is at the cafeteria. Le Pain Quotidian does coffee too. If you want tea, on Saturday this year OpenUK are serving tea and biscuits and Brexit commiseration on their stand.

Beer is a fixture at Fosdem. Belgium makes some of the finest beers in the world, and some ok ones too. Beers are sold at several points in the venue, and it is common to take them to talks and so on. Beware most Belgian beers are strong. Also the kriek they sell at the venue is terrible, even though Belgium makes some amazing examples of this beer style. There is a pre-conference “beer event” on Friday, I haven’t even tried to go for many years, even though they take over an entire street it is too crowded to be enjoyable or find anyone you want to talk to. Yes, there are a lot of alcohol focused events, and events in bars which could be offputting if you don’t drink. 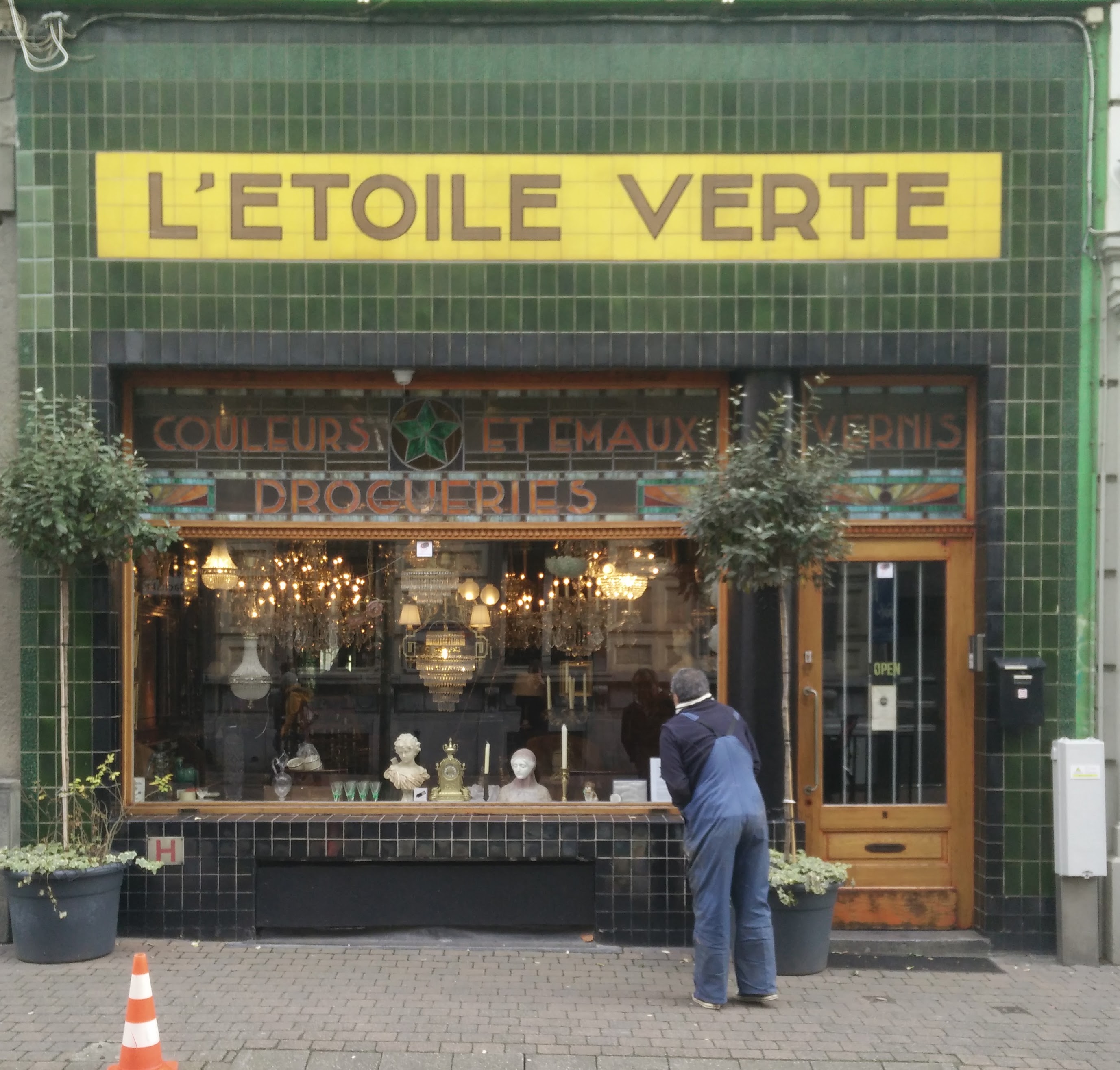 Brussels is a lovely city. The architecture is beautiful, both the old as exemplified by Grand Place which is magical in the evening, and the art deco gems, such as the Musical Instrument Museum, once a shop, and the diversity everywhere. It is said that there is a rule about not copying buildings, although I am not sure this is really the cause, but Belgium does not have terraces of identical houses, but every building is totally different. The Belgians are also as eccentric as the British, if not more so. Also don’t miss the Galaries Royal St Hubert, the first glazed shopping street in Europe, from 1847.

Perhaps my favourite area are the parts between Sablon, which has a grand antique market and excellent chocolate shops, and the Marché aux Puces, the flea market which is full of junk. In between are several streets lagely filled with antique shops, selling midcentury furniture, and well everything. Some are huge inside full of things and stuff of every kind just jumbled up anyhow. There are often amazing window displays like the one below. 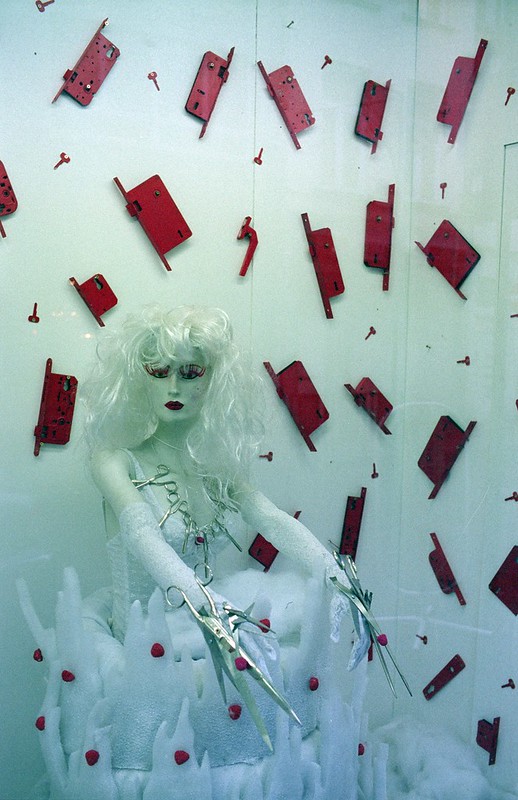 Food in Brussels is really good, although Fosdem is not always the best time to eat as you are often with indeterminate amounts of people and getting reservations, which are often needed on Friday and Saturday nights, is hard. Also most places are small. Brussels is very international, and all kinds of food are available there. While most people just think that Belgian food is frites with mayonnaise and waffles, but there is both French and Flemish food that are traditional, and great seafood, not just mussels. The local beer is lambic beer, the sourdough of beer styles made with wild yeast that is only made in the region. Cantillon is one of the best, and has an amazing museum in the working brewery in Brussels. This styleof beer is sour, but it is absolutely delicious. If you love this style, Moeder Lambic is a great place to try it. There have been a number of new breweries open recently, de la Senne is excellent and available in good bars.

This year, the Friday night before Fosdem is Brexit. Brussels has a large UK community, and Fosdem always has a large UK contingent, with whole Eurostar trains being filled on Friday evening usually. So be nice to any of us you see.

So, yeah, that is Fosdem. Unique. Could be better. Enjoy Brussels.